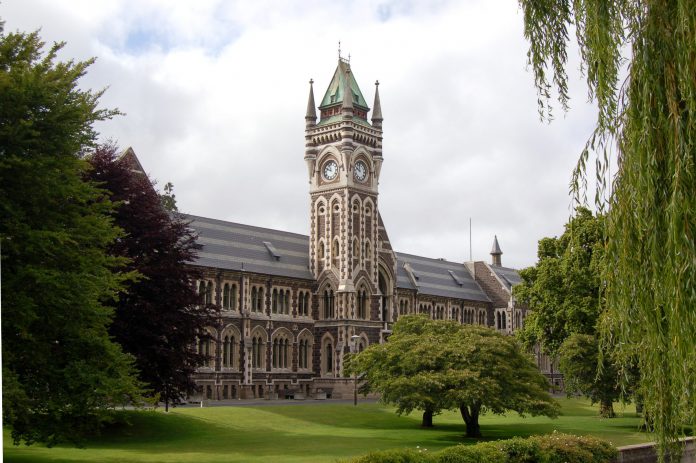 The University of Otago (Māori: Te Whare Wānanga o Otāgo) is a public collegiate university located in Dunedin, Otago, New Zealand. It scores highly for average research quality, and in 2006 was second only to the University of Auckland in the number of A-rated academic researchers it employs. The university ranks highly in national league table; in the past it has topped the New Zealand Performance Based Research Fund evaluation.[3]

The university was created by a committee, including Thomas Burns, and officially established by an ordinance of the Otago Provincial Council in 1869. The university accepted its first students in July 1871, making it the oldest university in New Zealand and third-oldest in Oceania. Between 1874 and 1961 the University of Otago was a part of the federal University of New Zealand, and issued degrees in its name.

Otago is known for its lively student life, particularly its flatting, which is often in old houses. Otago students (Scarifies) have a long standing tradition of naming their flats. The nickname “Scarified” comes from the habit of wearing a scarf during cold southern winters.[7] The university’s graduation song, Gaudeamus igitur, iuvenes dum sumus (“Let us rejoice, while we are young”), acknowledges students will continue to live up to the challenge if not always in the way intended.